Storage bridges have become an ubiquitous part of today’s computing ecosystems. The bridges may be external or internal, with the former ones enabling a range of direct-attached storage (DAS) units. These may range from thumb drives using an UFD controller to full-blown RAID towers carrying Infiniband and Thunderbolt links. From a bus-powered DAS viewpoint, Thunderbolt has been restricted to premium devices, but the variants of USB 3.2 have emerged as mass-market high-performance alternatives. USB 3.2 Gen 2×2 enables the highest performance class (up to 20 Gbps) in USB devices without resorting to PCIe tunneling.

The last couple of years have seen many vendors introduce new products in this 20 Gbps-performance class – including portable SSDs and M.2 NVMe SSD enclosures. Host support has also started to look up. The key challenges for enclosures and portable SSDs supporting USB 3.2 Gen 2×2 include handling power consumption and managing thermals. We have been analyzing these aspects (in addition to regular performance numbers) in our reviews of the 20Gbps-performance class PSSDs and enclosures. The review below presents our evaluation report of Akasa’s AK-ENU3M2-07 – a USB 3.2 Gen 2×2 enclosure for M.2 NVMe SSDs.

SSD speeds and storage capacity have improved significantly in the last decade, thanks to rapid advancements in flash technology as well as high-speed interfaces / protocols. Starting from 2.5-inch disk drives barely able to saturate the SATA III (6 Gbps) interface in the early 2010s, we now have gumstick- and palm-sized drives with PCIe 4.0 support capable of sustaining more than 7000 MBps (56 Gbps).

These SSDs have also formed the base platform for portable SSDs. Traditionally, such drives have fallen into one of the six categories below, depending on the performance profile and internal components. Recently, we have seen direct flash-to-USB controllers across all but the highest performance tier listed here.

In addition to portable SSDs, this type of segmentation is also applicable to storage enclosures. Since the mid-2010s, we have seen a regular stream of SSD enclosures hit the market, catering to 2.5″, mSATA, and M.2 form-factors.

Akasa is a well-known manufacturer of thermal solutions for computing systems targeting industrial applications as well as home consumers. They have been maintaining a lineup of storage bridge products catering to different market segments since 2013. We reviewed a bunch of their M.2 SATA and NVMe enclosures last year, and came away impressed with their comprehensive lineup addressing different requirements. This review looks at the AK-ENU3M2-07, an aluminum enclosure sporting a USB 3.2 Gen 2×2 20Gbps Type-C upstream interface and a M.2 2230/42/60/80 NVMe downstream port internally. 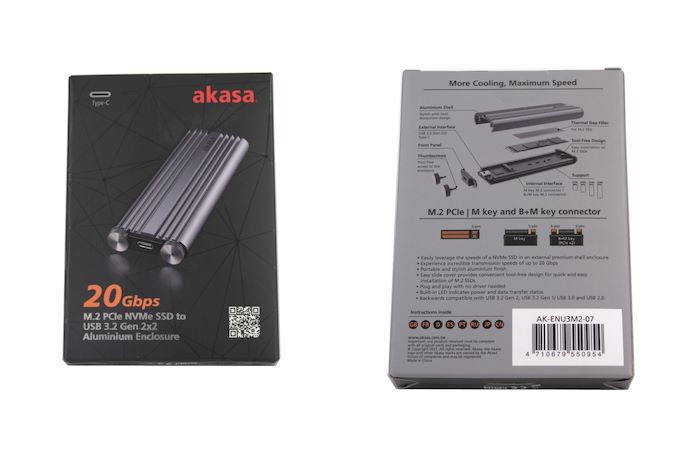 There are currently two shipping device solutions for USB 3.2 Gen 2×2 – the Silicon Motion SM2320 used in portable SSDs like the Kingston XS2000 is a native UFD controller, while the ASMedia ASM2364 is a bridge solution more suitable for use in enclosures. The AK-ENU3M2-07 uses the latter. The enclosure itself is made of solid aluminum with ridges to aid in heat dissipation. It comes with a single Type-C to Type-C cable rated for 20Gbps operation. A single thermal gap filler is supplied in the package along with a carrying pouch and a user manual. 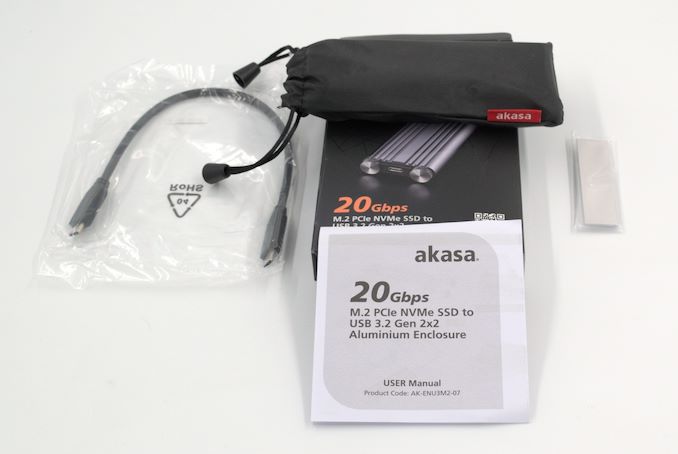 One of the attractive aspects of the AK-ENU3M2-07 is its tool-free nature. Accessing the internal board for SSD installation is a simple matter of loosening up the two screws on either side of the Type-C port. They are big enough to unscrew without the use of any tools. This allows the bottom panel to be slid out. The board itself is affixed to this panel, and doesn’t need to be taken out for any purpose. A plastic tab to hold the M.2 SSD in place is affixed to the 2280 hole by default. Rotating this tab along the notch allows the SSD to be placed in and locked in place. Without the SSD in the picture, further rotation to make the longer arm of the tab parallel to the rear panel allows it to be completely taken out (and affixed to one of the other holes corresponding to 30mm, 40mm, or 60mm SSD lengths). After the installation of the SSD, the thermal gap filler can be placed on top. The gallery below provides pictures of the enclosure as well as the SSD installation steps.

We evaluate M.2 NVMe storage enclosures using the SK hynix Gold P31 1TB NVMe SSD. Since this SSD is used in all the relevant reviews, it makes for an apples-to-apples comparison across different products. 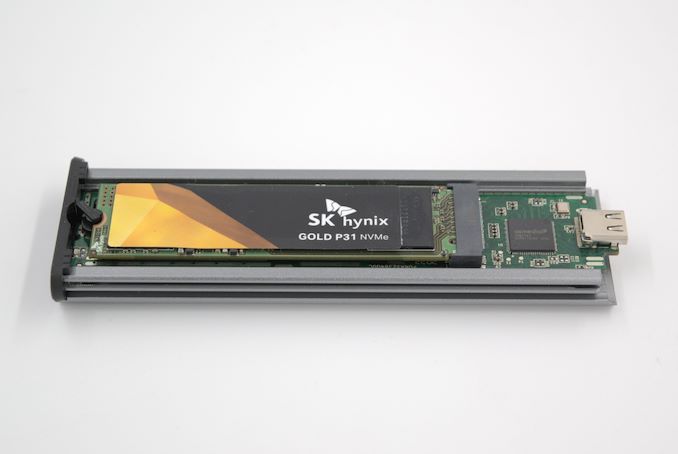 The table below presents a comparative view of the specifications of the different storage bridges and PSSDs presented in this review.

The key aspect that stands out is how heavy the AK-ENU3M2-07 is, compared to other enclosures using the same bridge chip. While the Akasa enclosure is 112g, the Silverstone MS12 is just 53g, and the Yottamaster HC2 is 60g. This gives the enclosure a higher thermal mass to cool down the SSD inside, and should potentially result in better thermal performance. Prior to looking at the benchmark numbers, power consumption, and thermal solution effectiveness, a description of the testbed setup and evaluation methodology is provided.

The most attractive aspect of the Quartz Canyon NUC is the presence of two PCIe slots (electrically, x16 and x4) for add-in cards. In the absence of a discrete GPU – for which there is no need in a DAS testbed – both slots are available. In fact, we also added a spare SanDisk Extreme PRO M.2 NVMe SSD to the CPU direct-attached M.2 22110 slot in the baseboard in order to avoid DMI bottlenecks when evaluating Thunderbolt 3 devices. This still allows for two add-in cards operating at x8 (x16 electrical) and x4 (x4 electrical). Since the Quartz Canyon NUC doesn’t have a native USB 3.2 Gen 2×2 port, Silverstone’s SST-ECU06 add-in card was installed in the x4 slot. All non-Thunderbolt devices are tested using the Type-C port enabled by the SST-ECU06.

The specifications of the testbed are summarized in the table below:

The testbed hardware is only one segment of the evaluation. Over the last few years, the typical direct-attached storage workloads for memory cards have also evolved. High bit-rate 4K videos at 60fps have become quite common, and 8K videos are starting to make an appearance. Game install sizes have also grown steadily even in portable game consoles, thanks to high resolution textures and artwork. Keeping these in mind, our evaluation scheme for direct-attached storage devices involves multiple workloads which are described in detail in the corresponding sections.

In the next section, we have an overview of the performance of the Akasa AK-ENU3M2-07 enclosure in these benchmarks. Prior to providing concluding remarks, we have some observations on the device’s power consumption numbers and thermal solution also.